Sausage and Spinach Stuffed Manicotti- Italian sausage, spinach and three cheeses all stuffed into manicotti noodles and topped with spaghetti sauce and mozzarella cheese. Comfort food at its finest! 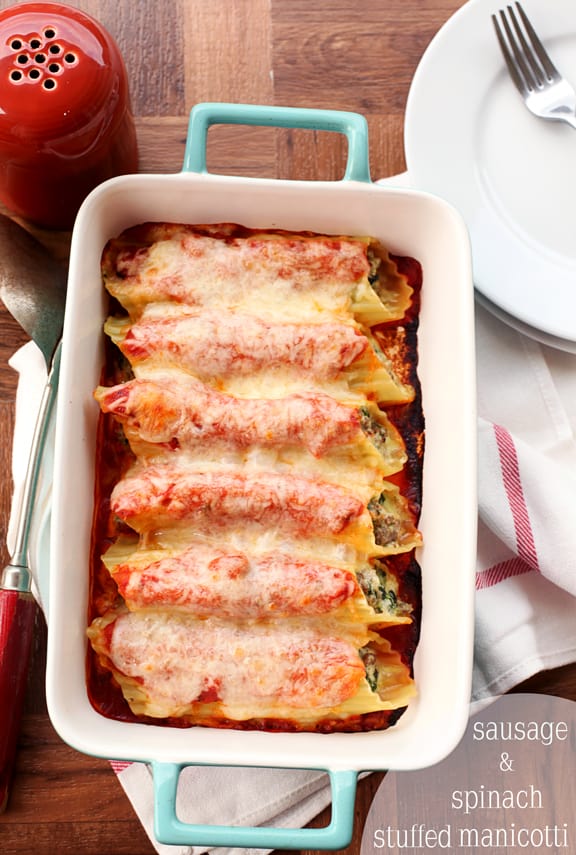 You guys!! This sausage and spinach stuffed manicotti is so delicious!! This recipe can be made using store bought spaghetti sauce which is a time saver if you want to go that route. This dish smells amazing and is the perfect meal if you want to take to someone or invite people over for dinner. 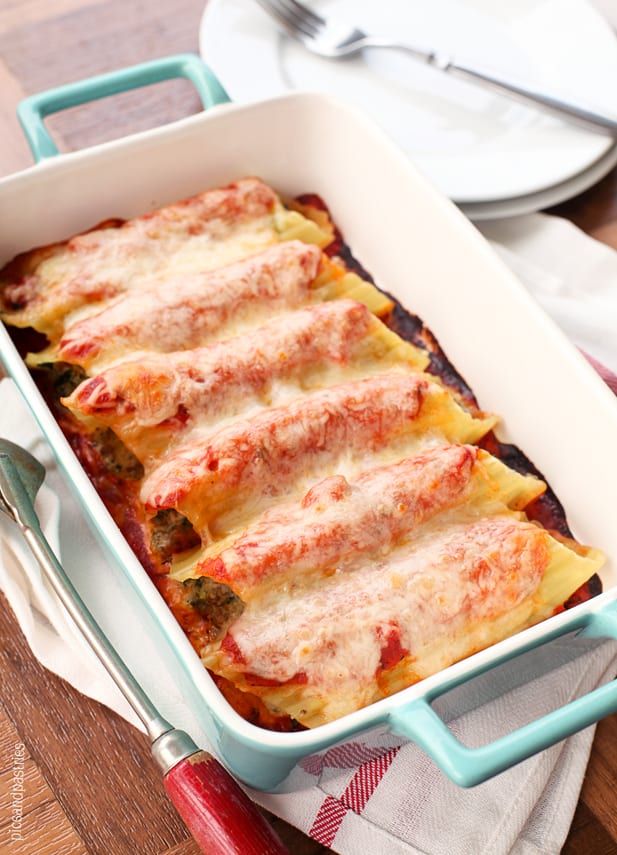 Pasta. Good! Meat. Good! Sauce. Good! Cheese. Good! I mean, it's a pan of comfort food that will make your house smell amazing while it's baking. I opened the oven door one too many times just so I could smell this dish. Then, as I closed the door I would say, "oh man!" Sadly. only my dog could hear me. However, that's how great this sausage and spinach stuffed manicotti is. I believe this recipe came from a former co-worker/friend. It's a recipe that is handwritten on an index card and I am pretty sure I know who it came from. Now, I write a little note on my cards with the date and the person's name who gave it to me so I will always know where it is from.

By the way, I share pictures of my dog on Instagram if you would like to follow me on there. Back to the deliciousness in the surrounding photos. I cook the manicotti based on the package directions (keep in mind they are going to bake in the oven for 35-40 minutes) and once they are ready to be removed from the boiling water I use tongs to lift them from the water and drain the excess water from them. Then, I place on wax paper to cool before I begin stuffing them. 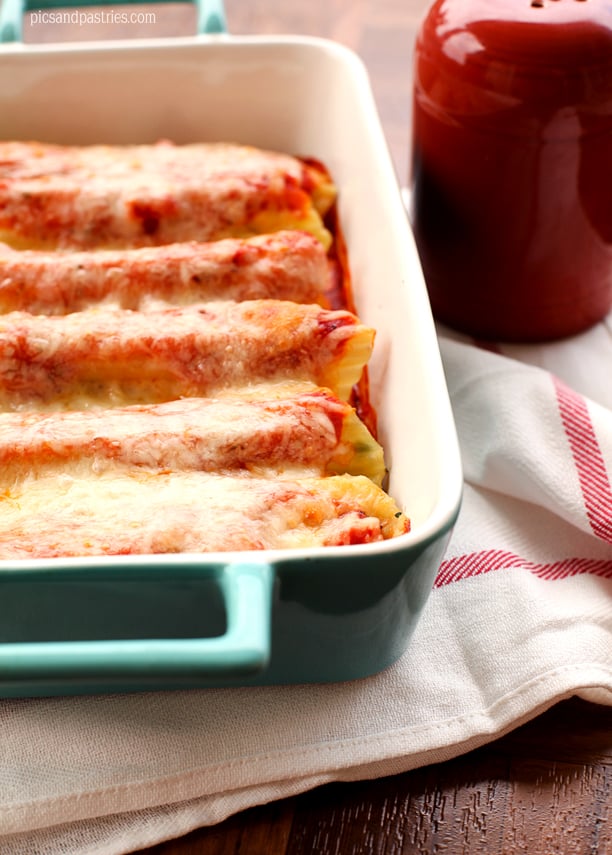 The meat could be prepared a head of time to help speed things up while making this dish. The overall time spent to make these is not that long but it never hurts to be a step ahead. 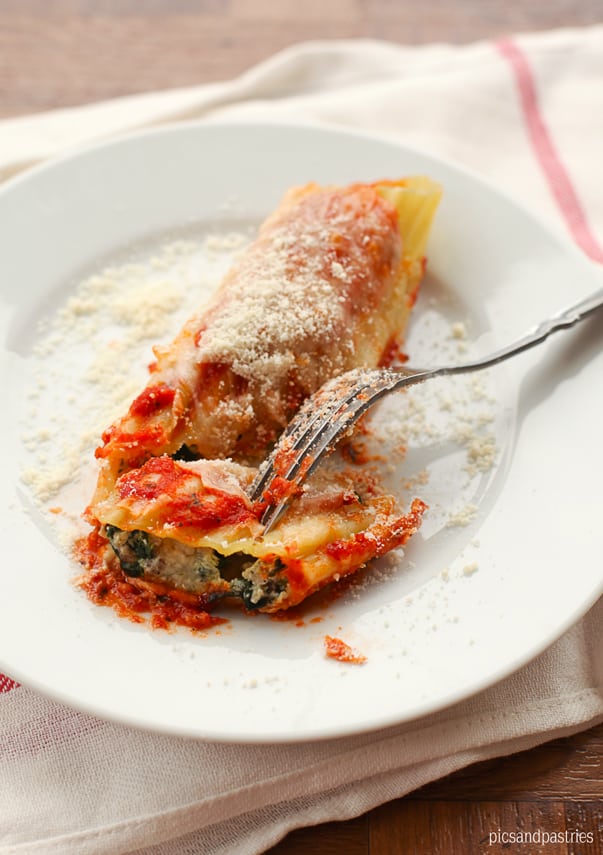 Would you like some manicotti with that Parmesan cheese?!? Who's the goober that doused that delicious looking manicotti with all that powdered cheese... Uhhhh  That would be me, folks! 🙂 I tend to do that sort of thing to food. 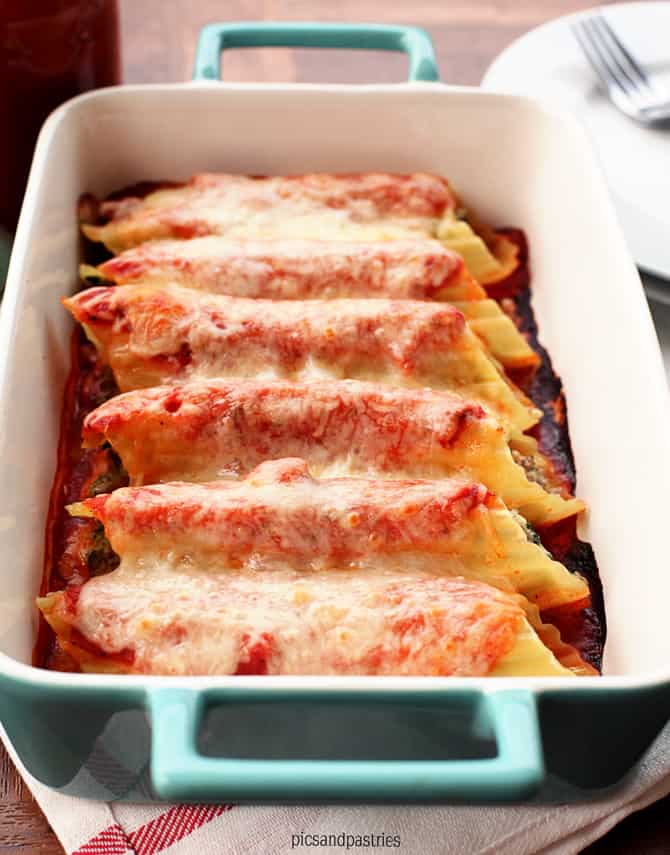 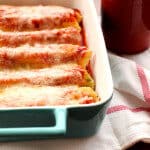 I did have more meat mixture leftover than I did manicottis so, if you want to scale down the meat to 1 and a half pound that will be fine. I've even made it with one pound and I didn't think it needed more. 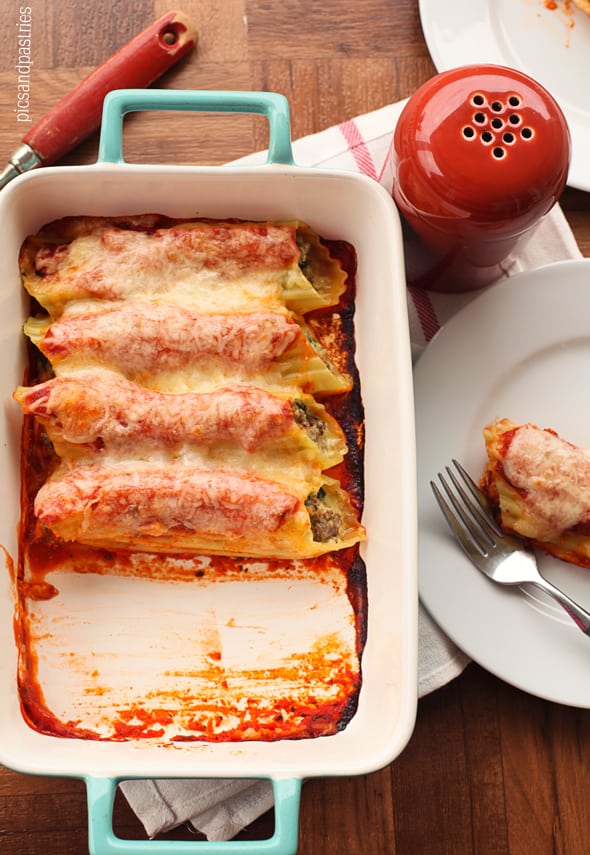