Almost 24hours after Grayson was born I finally got to see and hold him. I had never been in a NICU before and the one Grayson was in holds around 130 babies and there were 130 babies in there. It's a very sad place. We washed our hands and put on our gown coverings and then Jason led the way to Grayson's "spot." He was one of many babies in a very large room on one side of the NICU.

I told Jason that I would have known Grayson was my baby had he not led me to him. Out of all the babies in there and with only having a small glimpse of him the day before I still would have known he was mine. Call it mother's intuition if you want, but we are connected in a special way and the feeling I got once by his side told me he was mine. 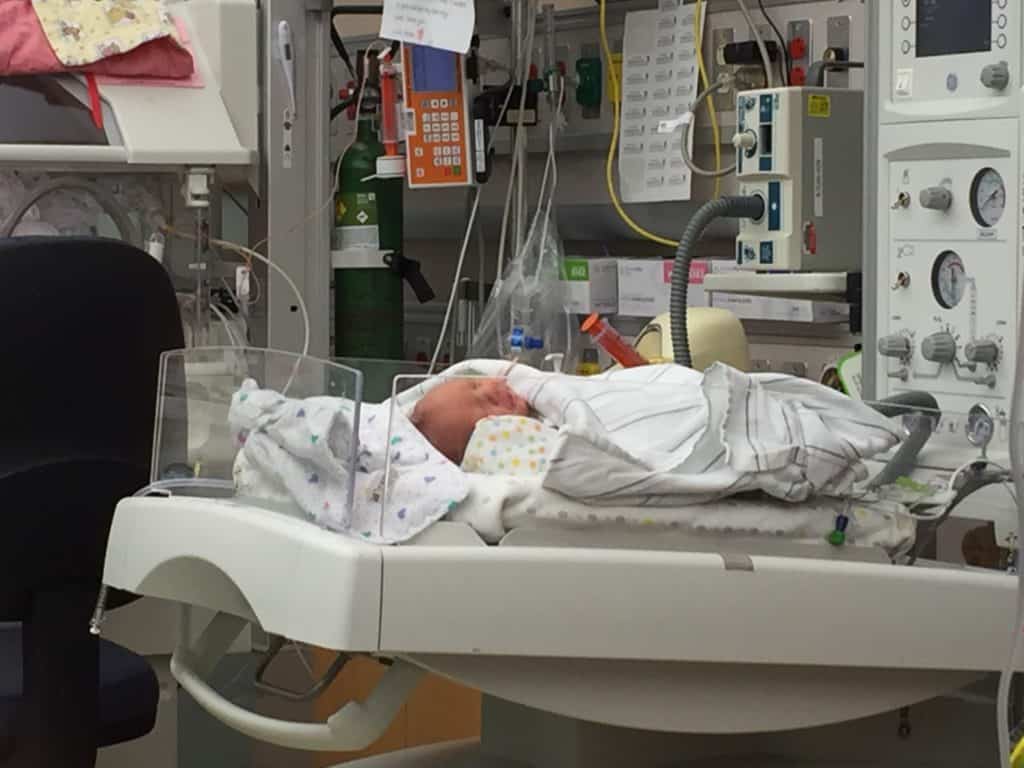 Grayson was on a ventilator so it took his two nurses to pick him up and hand him to me. Since he was considered in critical condition he had two nurses taking care of him. All his nurses were wonderful, by the way. 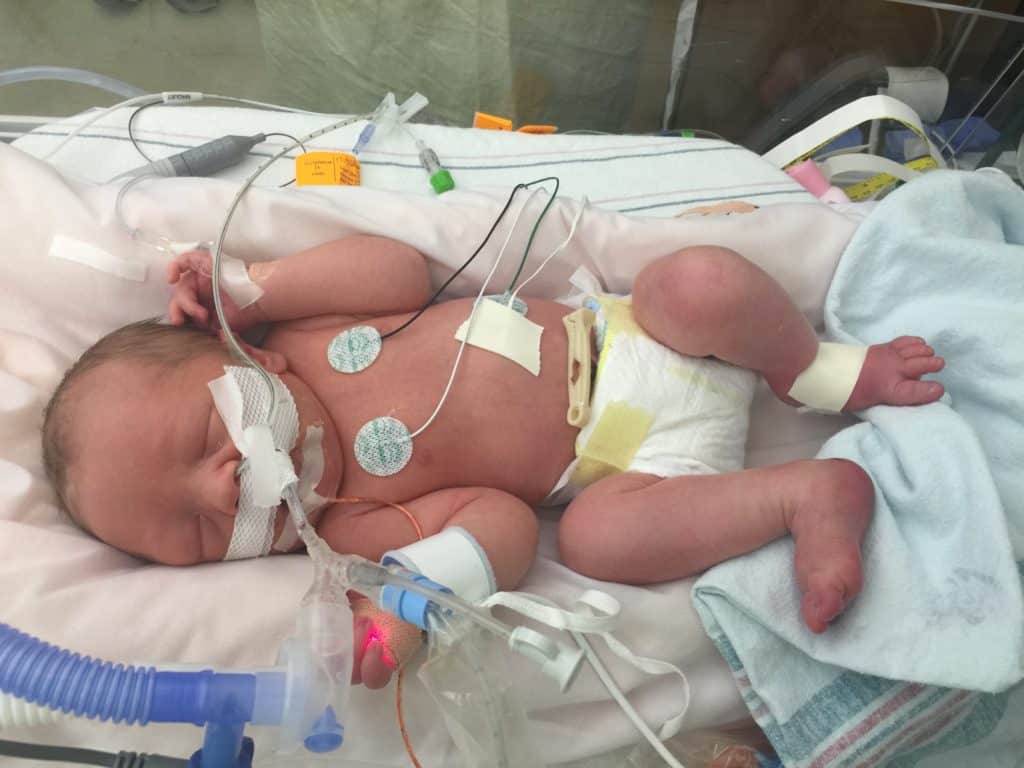 If I am going to be honest holding him for the first time was so emotional for Jason and me. The nurses asked if we were okay and we said yes, but it's just not how we imagined.

A couple of days later we discovered Grayson had a hole in his left lung and needed a chest tube. During that time the right lung kept collapsing because it was being overworked since the left lung had the chest tube. When Grayson was a week old I had only held him three times. As long as he had the chest tube we weren't able to pick him up. By the end of the week he was breathing room air though. He was given his first bottle when he was a week and one day old as well as being able to wear clothes not just lay with a diaper under a heat lamp. Since he had the chest tube we couldn't dress him in clothes.

I read Grayson his first book on that Saturday. It's not the book I planned on reading to him for the first time but I had to choose a book that I would actually be able to read to him instead of cry the whole time while reading it. 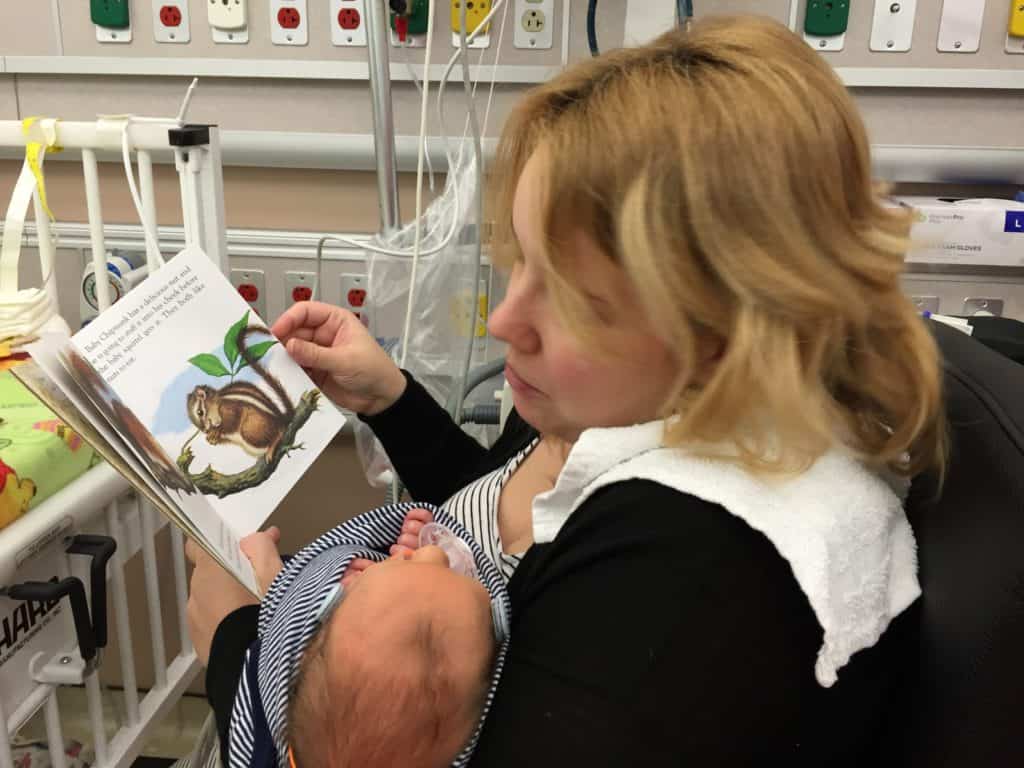 At this point Grayson was in the hospital only because he wasn't eating enough on his own and still required the feeding tube. We quickly learned that white, premature boys are the last to figure out how to actually feed. It's called the WIMPY syndrome in the NICU. White, infant, male, premature-Google it. It's real. 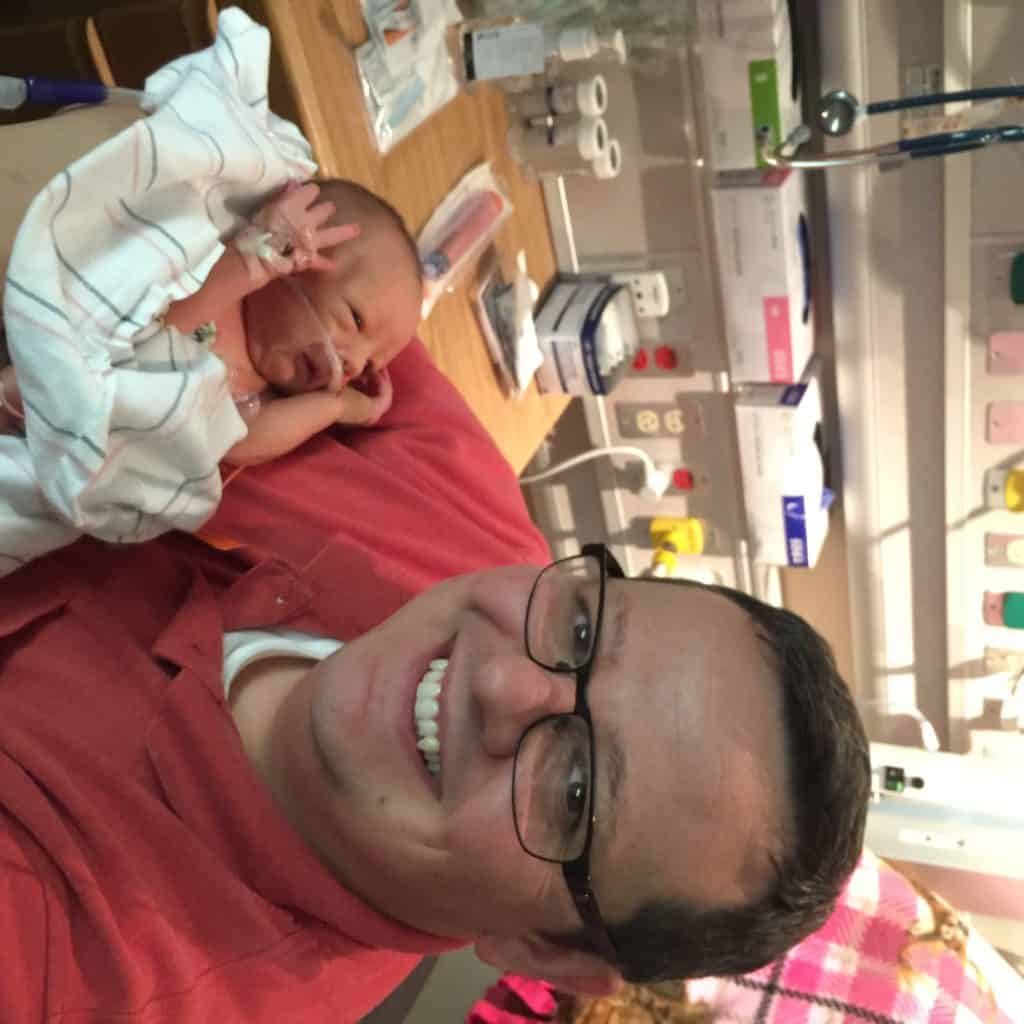 Grayson also had a hole in his heart and a valve that didn't close. Both are very common, especially in preemies.We had to treat the valve that didn't close (PFO) because it was interfering with his breathing. Thankfully it only needed medicine.  (as of the end of January, we met with his Cardiologist and the hole in his heart is closed and we don't need to see them anymore.) 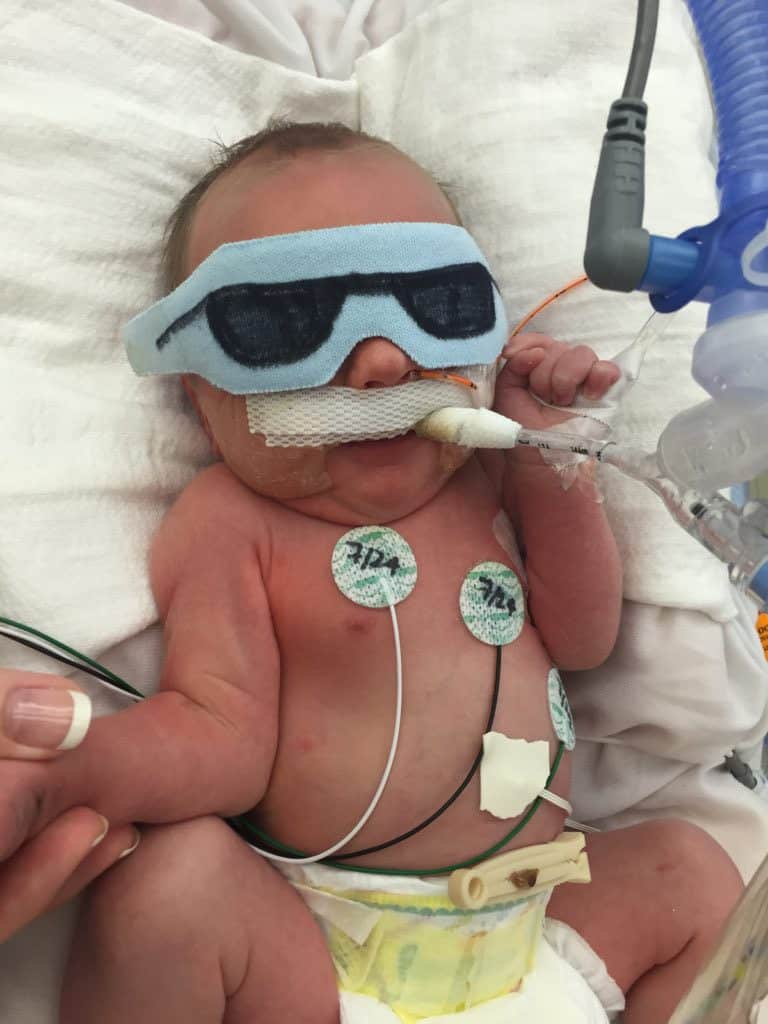 His nurse gave him "sunglasses" while he laid under the blue lights. I don't know if I had ever smiled so big.

So after three weeks we thought Grayson was about ready to come home. He had been gaining weight and was taking his bottles successfully. Until one day his oxygen was dropping. He would hang out in the eighties and ideally it's upper nineties or a hundred.

After this went on for a little while they had to hook him back up to oxygen and did a chest x-ray. The x-ray showed fluid on his lungs but they didn't know why at the time. A couple of days later we did a swallow study with the speech pathologist and discovered Grayson was slightly aspirating his milk. So he immediately was hooked back up the the feeding tube and thats how he was fed for a week until we re-did the study. At this point he was use to bottle feeding and would root around when hungry. We were there for all his feedings expect through the night. So he was always held while being fed and we pushed the pacifier so he would get use to sucking on something while getting fed. 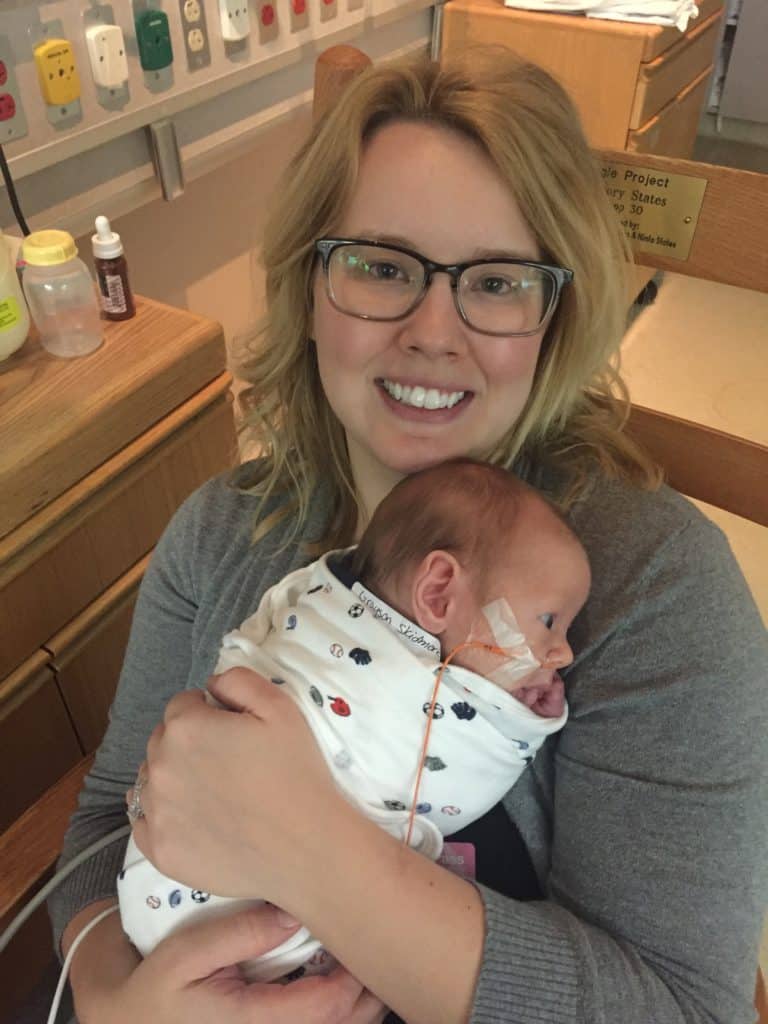 A couple of days before the re-testing of the swallow study Grayson's doctor prepared us for the worst case scenario. He believed Grayson would fail again and that we would be taking him home with a feeding tube. We told him we thought he would do okay and were going to be positive. We prayed and prayed and prayed. We had people everywhere praying for our little guy and the day of the test, he passed. The doctors couldn't believe it!

So Grayson was immediately put back on bottle feedings and we waited a few more days to make sure his weight stayed in the right direction and eventually he came home on August 25th.

That's the short version of his NICU stay. There were so many times we thought he was coming home only for something to happen and deflate our hopes. Overall, the main issue was breathing and feedings. He had jaundice twice and had to be under the blue lights.

The first 5 weeks were hard.. Leaving him each night never got easier. I called to check on him every night around 3:00 a.m. when I would wake up to pump. He had to eat every three hours so the nurses could always give me an update on how much he ate and just how he was doing. I hated that I couldn't hold him and rock him to sleep at home at 3 a.m. I hated that I had to call and check on bed 34 and give the receptionist our security code, but at the end of the day I was so thankful for him and that within a week his issues were relatively minor compared to other situations that he could have been in. 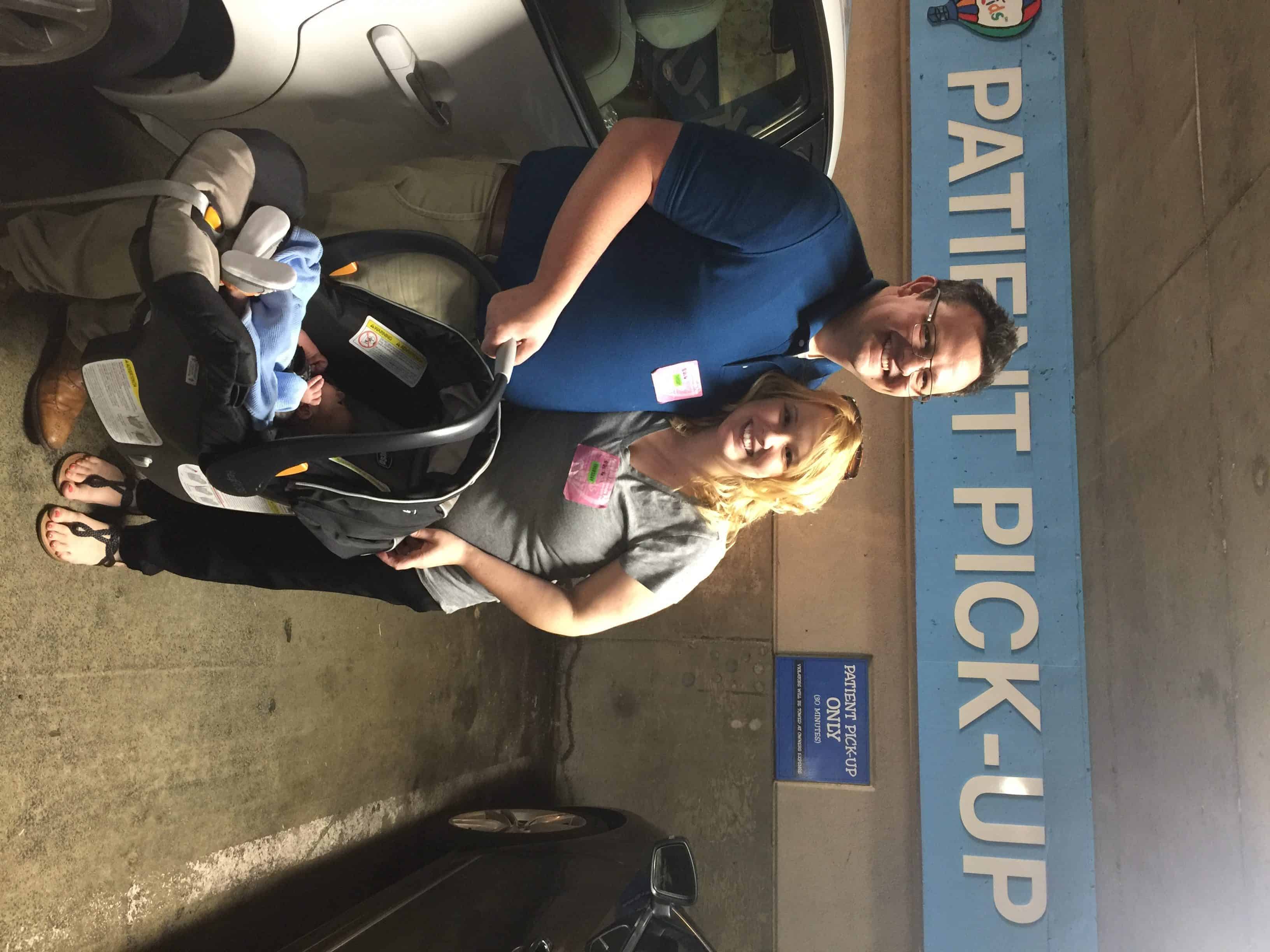 Grayson was born 5 weeks early and spent 5 weeks in the NICU. He just needed more time and that's what he got. We had wonderful doctors and nurses taking care of him and always knew he was in good hands. 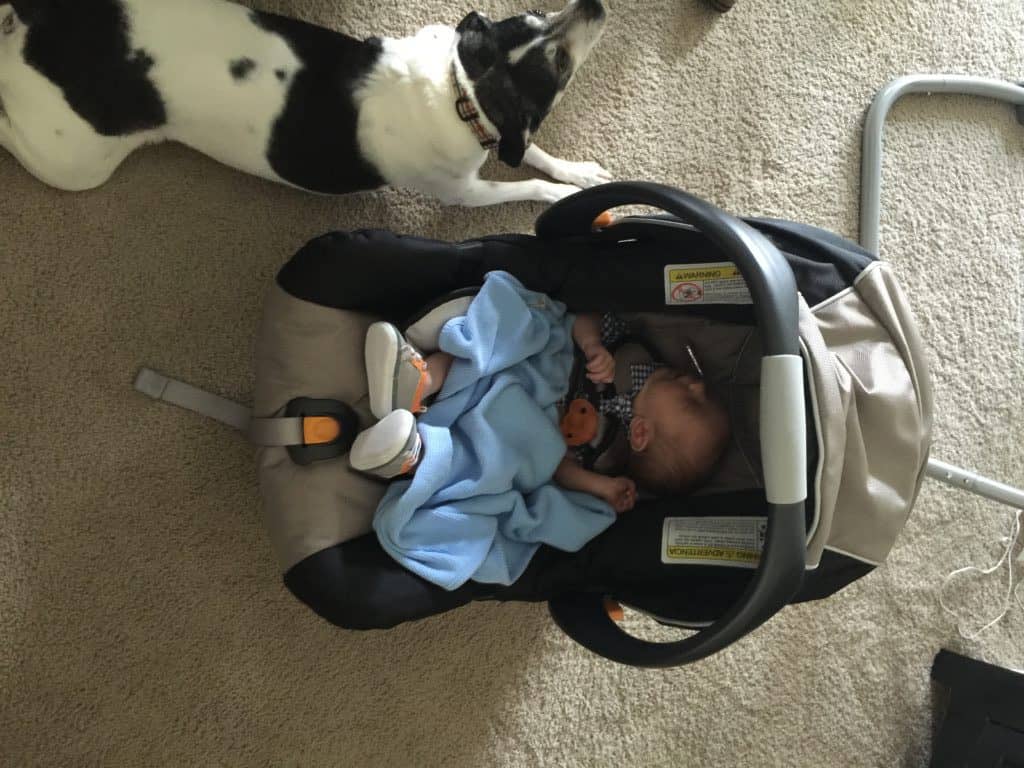 Our dog, Fonzie was finally able to meet his little brother! 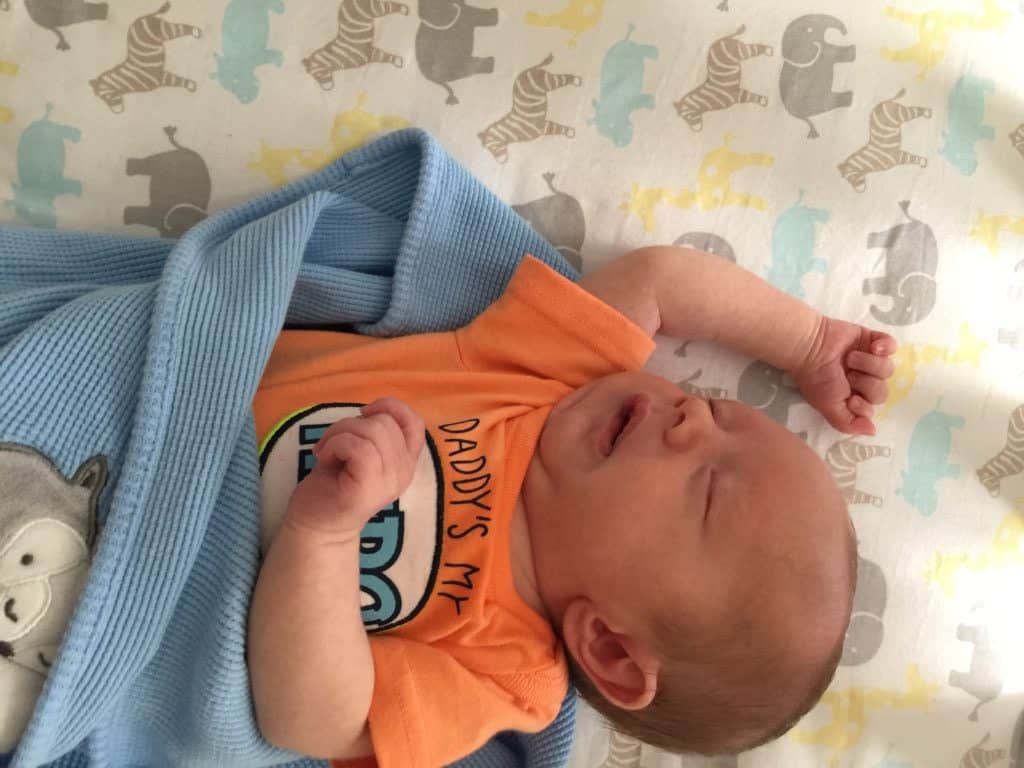 The first morning after his first night at home.

« Welcome Baby Grayson: A Birth Story-part 2
This & That »